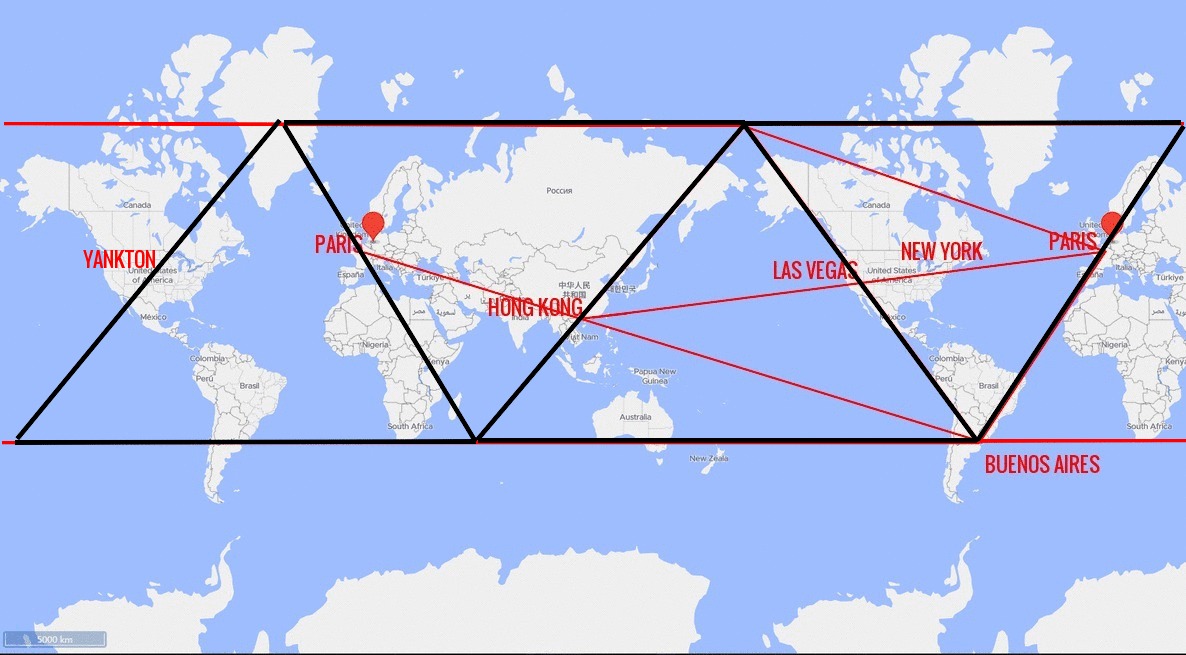 In a style that is highly reminiscent of what Alan Moore did with London in From Hell, (a masterful comic book about Jack the Ripper), under the surface of its geography, the town of Twin Peaks hides a complex series of mystical links that connects elements of the story that would otherwise remain separate. 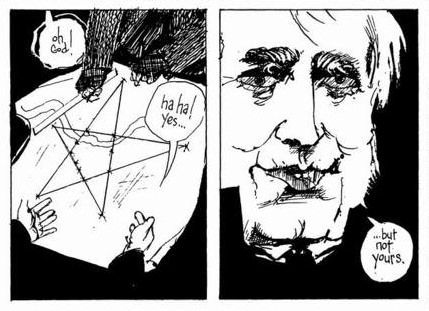 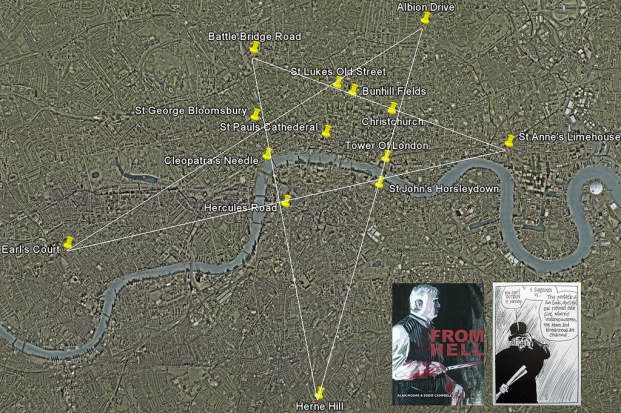 The importance devoted to geography in the series can be linked to the following quote from Mark Frost: 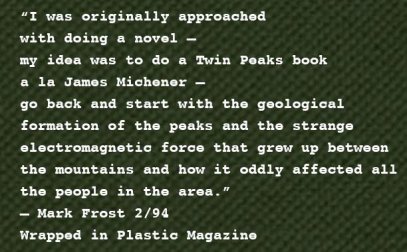 Geology (caves, mines, etc.) and Hollow Earth Theories (here’s the article I wrote on the subject in April last year: link) play an important role in Frost’s book The Secret History of Twin Peaks. It is as if the Earth itself plays a role in the story. Inhabited by aliens from underground (as opposed to aliens form outer-space), the planet becomes symbolic of the minds of the characters, haunted by their unconscious. This can also be linked to the famous subterranean realm of Agartha in Tibet (we already know the importance of Tibet in Twin Peaks mythology):

The word “Agharta” is of Buddhist origin. It refers to the Subterranean World or Empire in whose existence all true Buddhists fervently believe. They also believe that this Subterranean World has millions of inhabitants and many cities, all under the supreme domination of the subterranean world capital, Shamballah, where dwells the Supreme Ruler of this Empire, known in the Orient as the King of the World. It is believed that he gave his orders to the Dalai Lama of Tibet, who was his terrestrial representative, his messages being transmitted through certain secret tunnels connecting the Subterranean World with Tibet.

The idea of subterranean tunnels running across the world certainly makes sense in Twin Peaks. They might not all be tunnels carved in stone, but this world is full of electromagnetic shortcuts that seem to align with important geological features and cities.

I have already analyzed in a former blog post the startling pattern that emerges on a map of the USA when tracing the various trips made during The Return by Cooper’s avatars. These lines draw a 3D pyramid in the west of the country which appears to point towards New York (in 4D, as in the Fourth Dimension of Theosophy?). 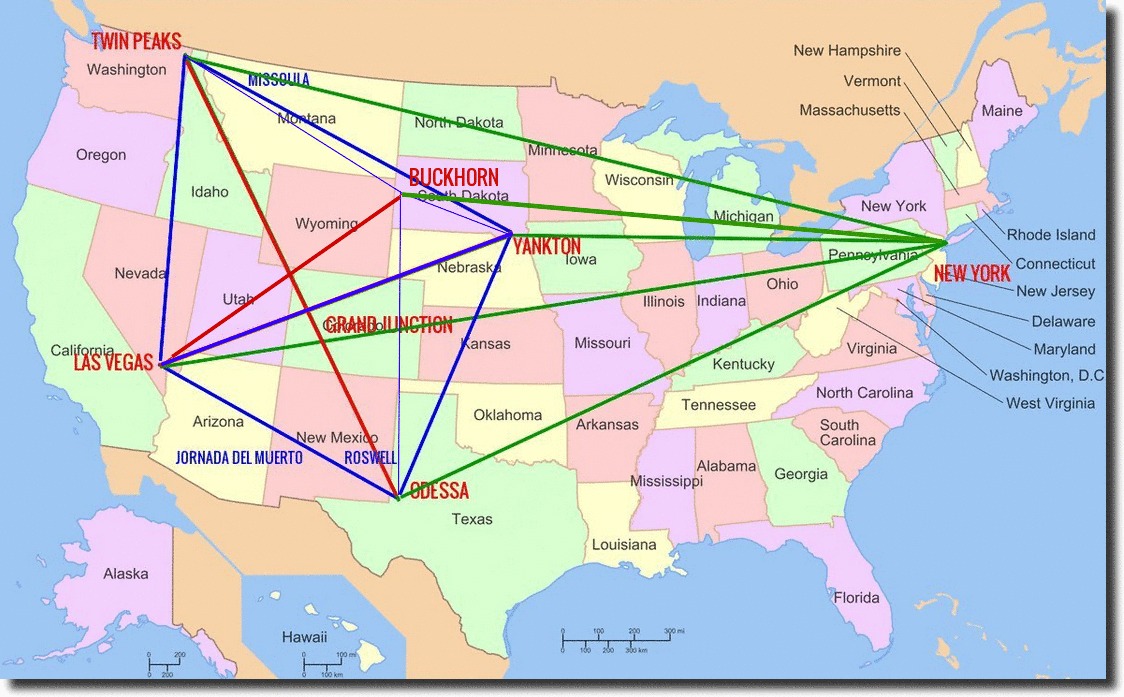 Should this be linked to the usual symbol for the Illuminati, the esoteric society that plays such a major (evil) role in Mark Frost’s The Secret History of Twin Peaks? This would make a lot of sense when one remembers that their most famous symbol is the one of the All-Seing Eye, found notably on dollar bills atop… a pyramid! The Return is replete with references to surveillance, and perhaps the most obvious of these is found in New York, with the glass cube experiment that is constantly watched and videotaped. It seems impossible to evade the All-Seing Eye in The Return. But the question is of course, to figure out who is behind this eye. 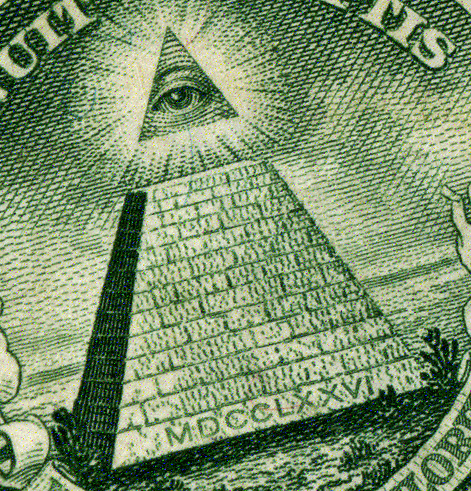 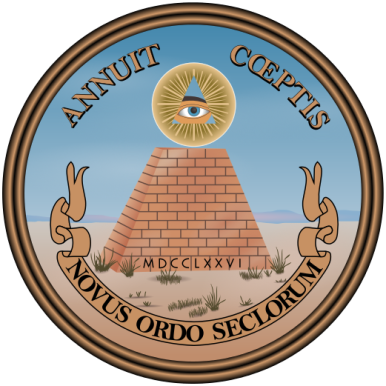 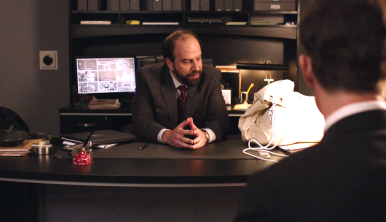 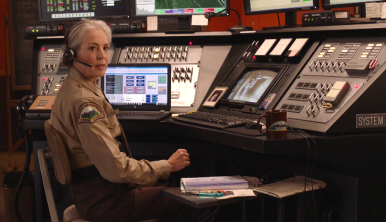 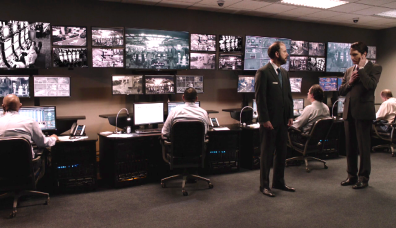 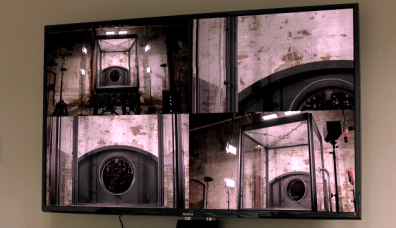 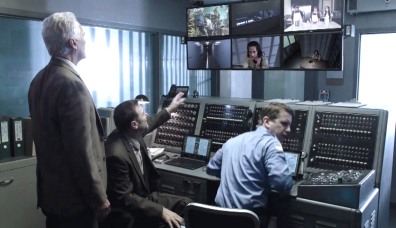 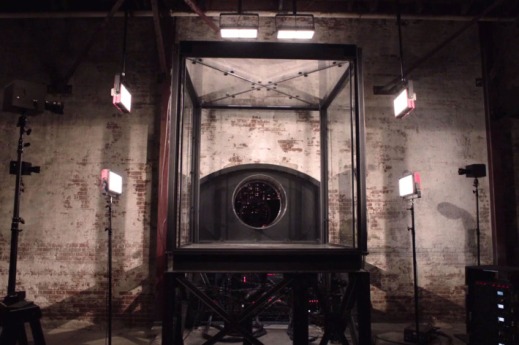 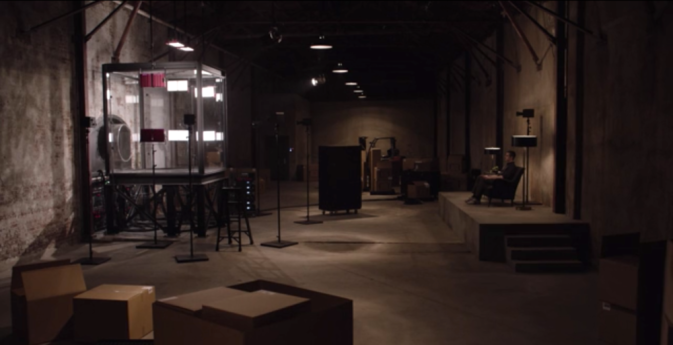 Beyond the USA, one can also broaden the scope and study the way in which geography, alignments, and symmetry play a role on a continental level. Alignments have always played a central role in the mythology of the series, at least from a cosmological point of view with the Great Conjunction of Jupiter and Saturn, which is supposed to open the doors to the Lodges on a cyclical basis. It is possible to find such alignments on the surface of the Earth as I will explain below.

First, the link needs to be made between North and South America. This is achieved when one notices that the lines drawn between Las Vegas and Buenos Aires, and those between Yankton and Rio de Janeiro, are parallel. A third line actually runs parallel to those, the one between Twin Peaks and Odessa (crossing through Grand Junction). Two parallel lines could possibly be due to chance (even though they both lead to cities that play a major role in the story), but three makes it almost impossible. South-America appears to play the role of a mirror image to that of North-America. 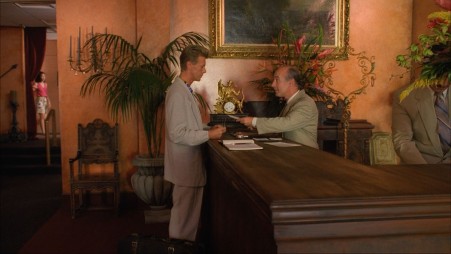 It is possible to continue this search for lines of force across the Americas. For instance, note that the line Yankton / Buenos Aires runs parallel to the one between New York and Rio de Janeiro: 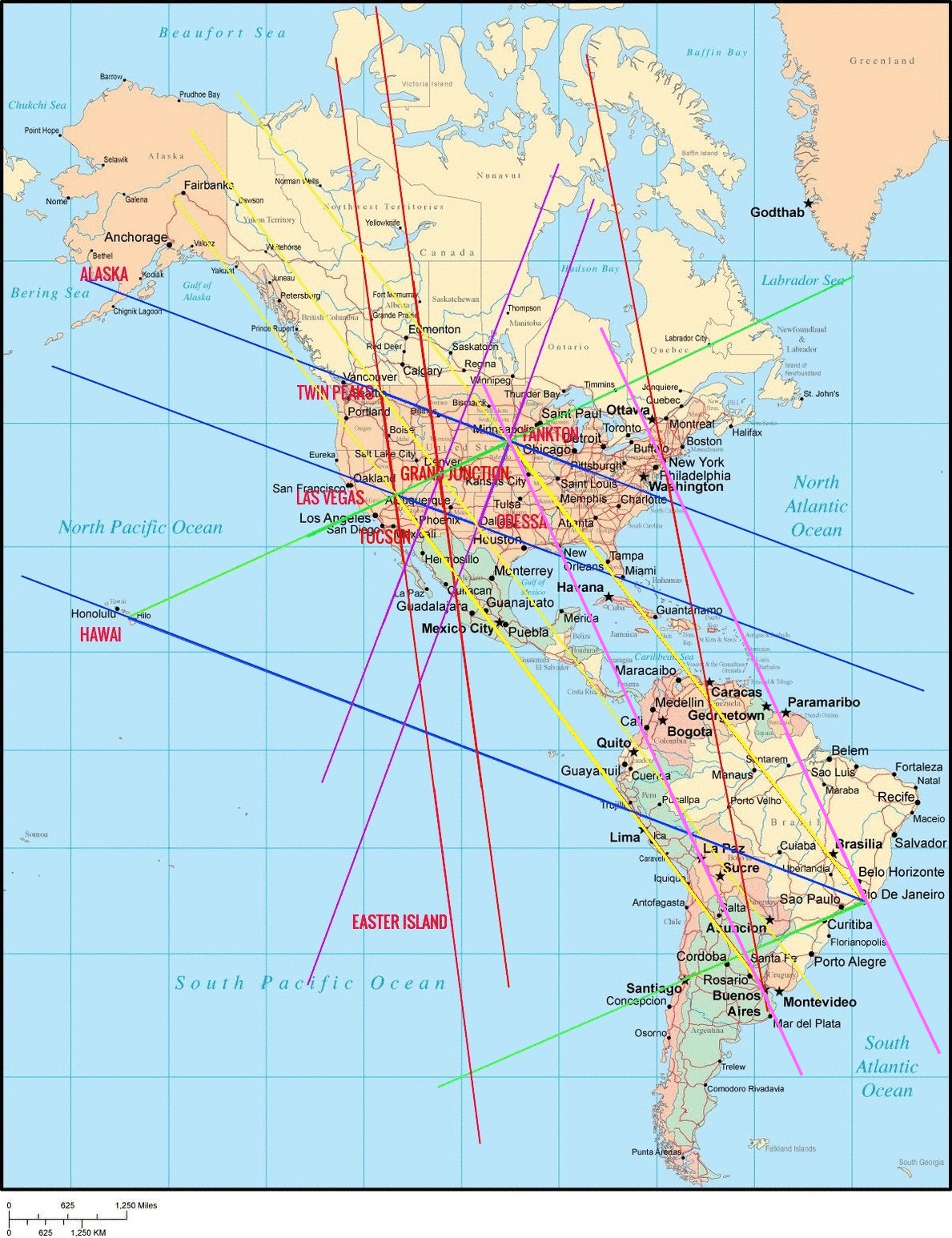 Here is the (complex) map of such links that I have traced so far: Twin Peaks / Hawaii (Doctor Jacoby) seems to run parallel to Buenos Aires / Rio de Janeiro, while Anchorage (Carl Rodd lived in Alaska, as well as in Yellowknife – the line between Grand Junction and Jornada del Muerto passes close to that city & Fred Crisman discovered a Lemurian frozen cave in Alaska) / Yankton follows the same directions as Hawaii / Buenos Aires, etc.

There is no overarching theory to explain all these lines except for the fact that underground connections appear to link elements that might superficially appear disconnected. The presences of Phillip Jeffries in Buenos Aires on the one hand and of Mr. C in Rio de Janeiro on the other make  more sense as a result. They were just following the lines of force between the two continents, traveling to important nodes of electromagnetic energy, places where currents cross.

If we broaden our scope once again and look at the connections between America and Europe, it becomes apparent that Las Vegas, New York and Paris and linked by an invisible line. Even more startling, this same line continues westward towards Hong Kong! Josie Packard was the first character to appear on screen in the Twin Peaks’ pilot – is it possible that these lines were already drawn in the early 90s?

So, once again, not 2 or 3 cities on the same line, but 4 – pure chance should probably be ruled out in such an alignment, as with the new alignment that connects Buenos Aires, Hong Kong and Paris. 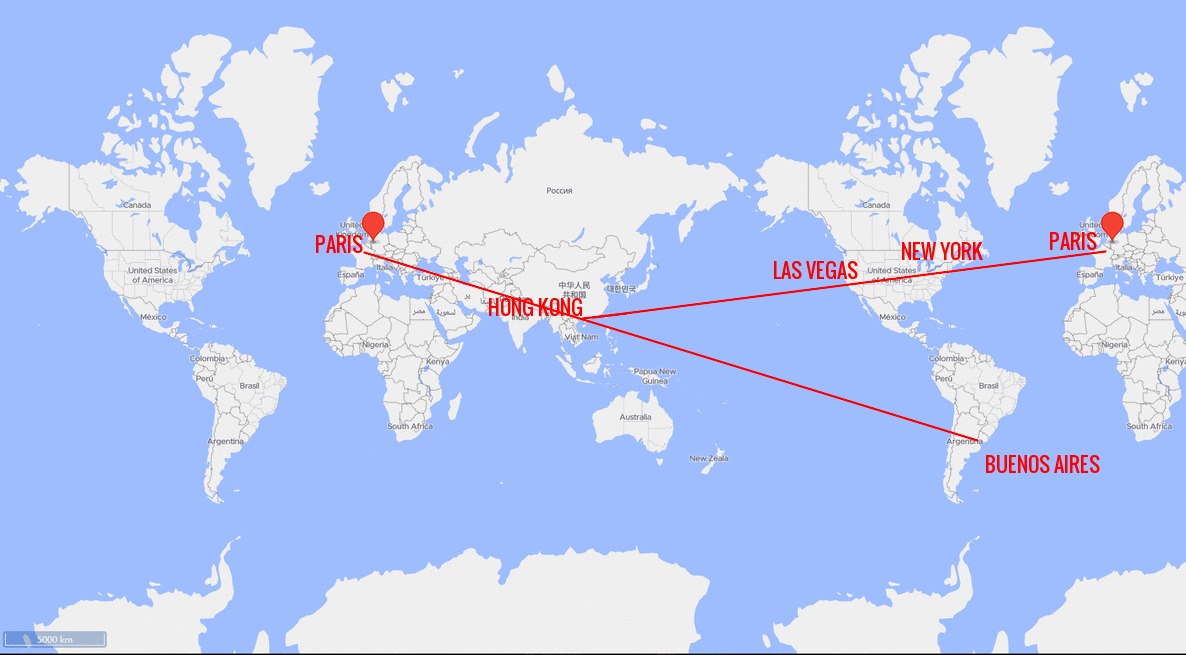 Then, continuing along the Buenos Aires / Hong Kong / Paris line further west and crossing line that runs through Buenos Aires and Las Vegas, note a point at the northwestern top of the Americas – could this be the famous Northwest Passage, the maritime route that almost gave its title to Twin Peaks? One linked to Hong Kong, note a beautiful parallelogram centered on Las Vegas, with two giant triangles on the West coast of the continent (the Pacific Ocean) and on its East coast (the Atlantic). The fact that the lines between Hong Kong and this Northwest Passage and the line between Buenos Aires and Paris run parallel once again indicates that this map is not the result of pure chance but of design. 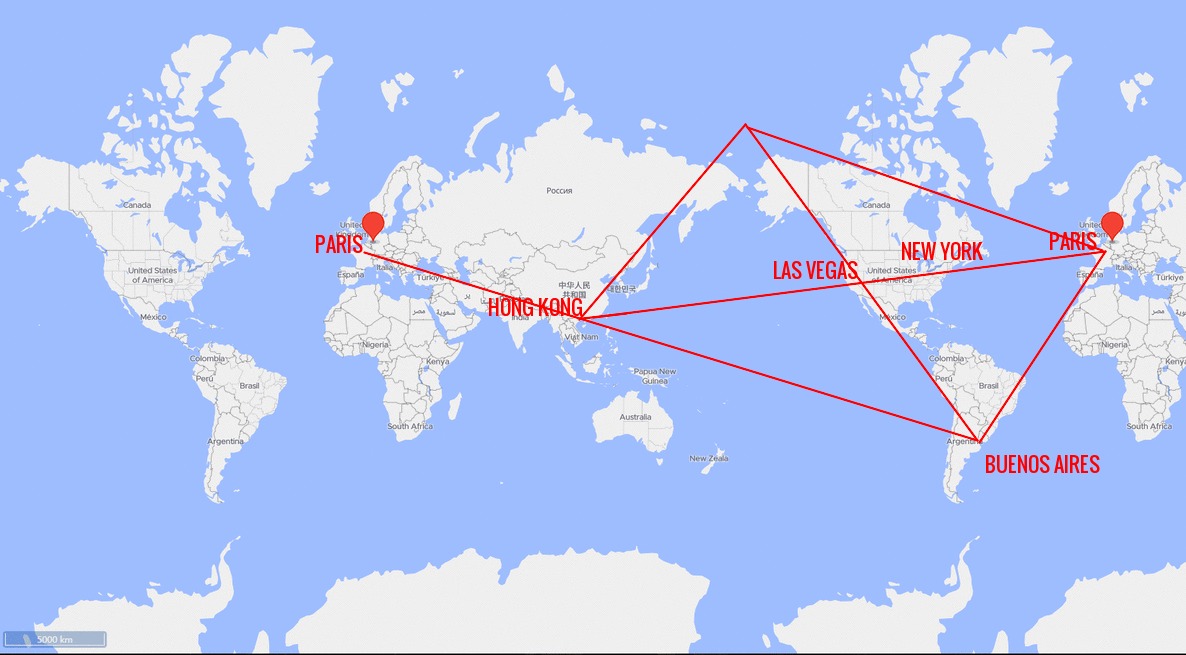 Now, let’s connect the dots between Buenos Aires and Hong Kong and between Hong Kong and Las Vegas. We get a similar box centered on the Canary Islands, close to the coast of Africa. What one needs to know is that some believe the islands to be remnants of the sunken continent of Atlantis. As David Lynch and Mark Frost were also working on a script about the lost continent of Lemuria just prior to beginning the filming of Twin Peaks (additionally, several mentions of Lemuria are made in The Secret History of Twin Peaks), it is possible to think of these two sides of the American continent shown in the giant triangles mentioned above as linked to these lost worlds (and their ongoing subterranean influences). 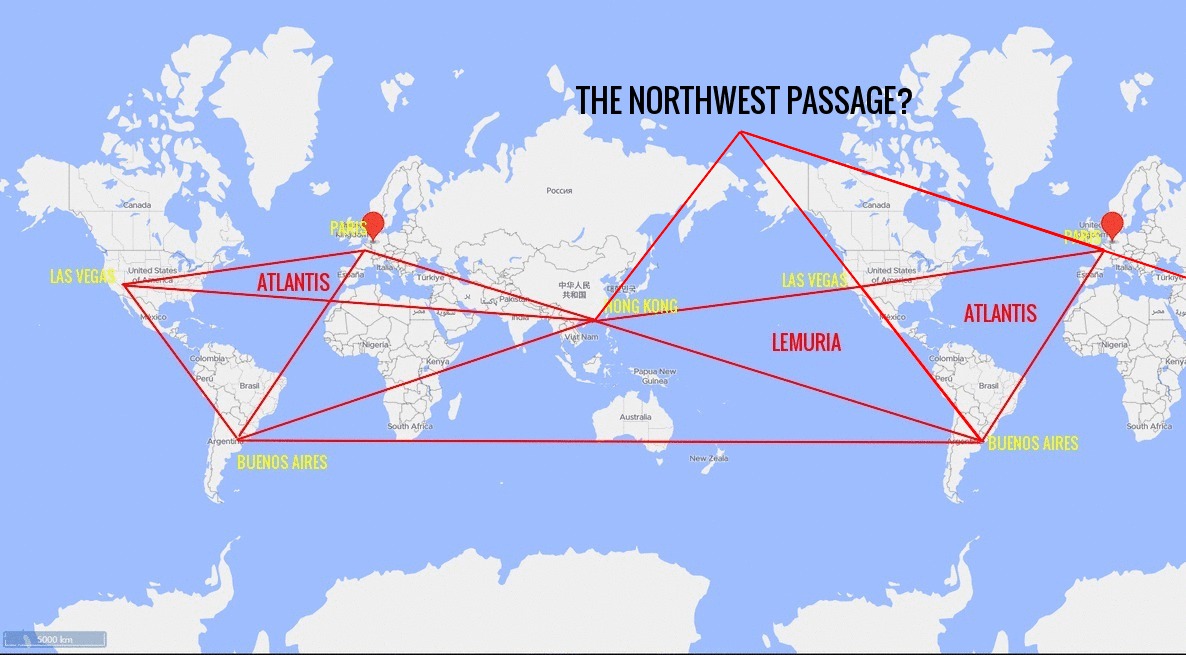 If we draw a horizontal line and the level of the Northwest Passage and one through Buenos Aires (which should probably be understood as the Southwest Passage, as proven by the disappearance of Phillip Jeffries there and also by the fact that the Lodge Entities declare, in Fire Walk With Me, that “from pure air we have descended, from pure air” – Buenos Aires means “good air” in Spanish), we can then continue the various lines already started on the map and make them rebound through the various important nodes already present. This is the result: 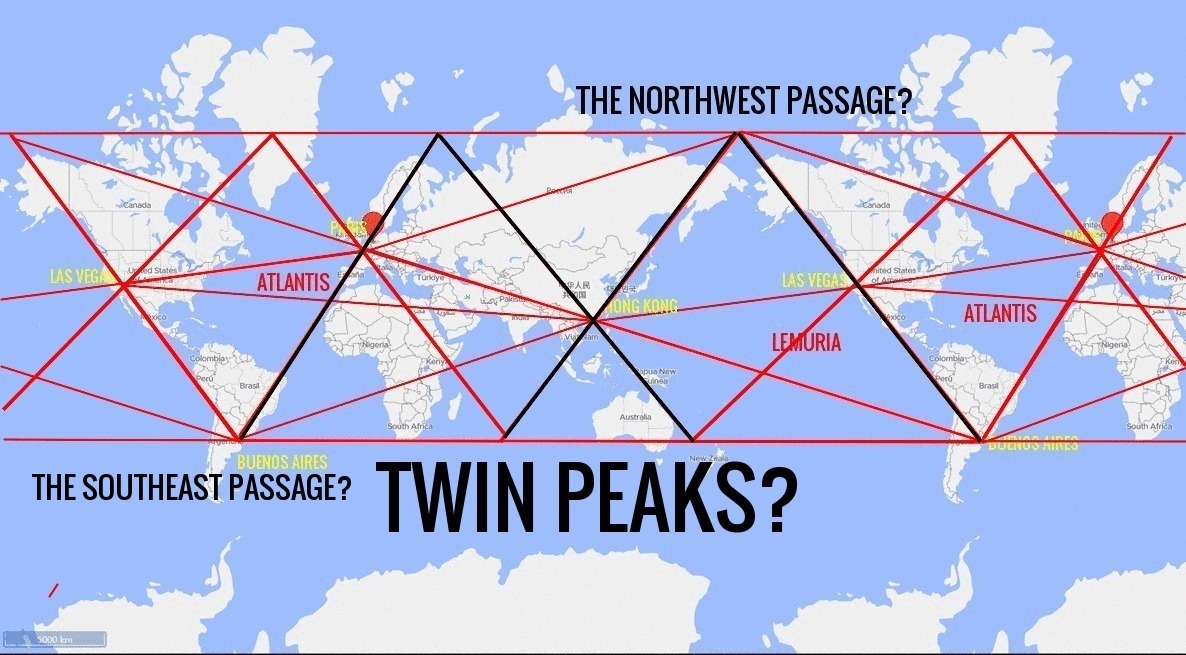 The chevron bandwidth reminiscent of the motif on the floor of the Lodges seems to draw two giant peaks across the map – are these the Twin Peaks that gave their name to the series? And what of the role of the two American Passages, the northern one and the southern one? Could they possibly be connected to the ongoing motif of the mirror image found throughout the episodes? Could they somehow be connected to the owl motif found in the Owl Cave in Twin Peaks and on the jade ring? Does the upward or downward direction faced by the symbol lead to the Northwest or to the Southeast Passages (to the Fourth Dimension)? 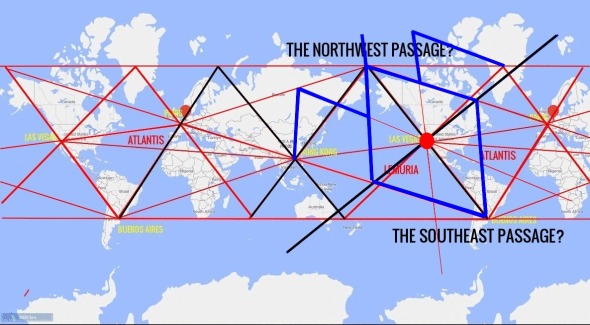 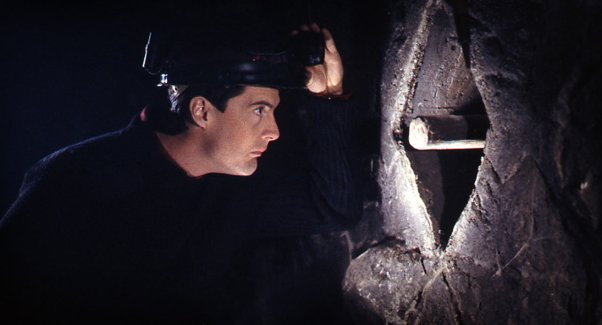 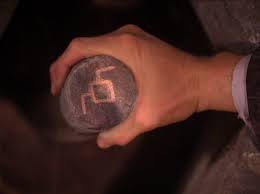 No definitive answer for the time being, just new paths to follow. The more we dig up under the surface narrative of Twin Peaks, the more surprising associations come up (BOB up?) to the surface. The search for the mythological meaning of the show began more than 25 years ago and it appears that most of the path is still ahead of us!