Much has been written about the role of time in Twin Peaks and the show is replete with references to temporal coordinates of all sorts: “I’ll see you again in 25 years”, “Time and time again”, “What year is this?”… Nevertheless, one should not underestimate the importance of space in this universe – both literally (as in episode 2, when Dale Cooper, until then a psychonaut, suddenly becomes an astronaut in outer space, on the platform at the top of Naido’s ladder) and metaphorically too.

In the new season, both time and space appear to be “out of joint”. The atomic blast of episode 8 has created a hole in the empty canvas of the desert (to quote Jack Parsons in The Secret History of Twin Peaks), tears and superimpositions of all sorts are everywhere. The enormous electromagnetic thimbles we notice over the course of several episodes appear unable to correctly sew back together the various dimensional membranes  – the cosmological “Big Rip” seems to win at the end of the series.

The Fireman (who I linked to Indra in a former post) tries to fight such dimensional tears, an attitude coherent with what one learns in the book Vedic Physics: “The main force of expansion in the Vedic cosmology is Indra, and his chief adversary, the main force of contraction, is Vritra… Indra will be identified here as electric force… The electric repulsion force must be stronger than the surface tension force in order for the universe to expand. This is the grand cosmic battle of Indra and Vritra… outcome of this battle determines whether there will be a universe or not” (p. 57-62).

In such a Space, in which tears and holes multiply, points that appear distant from each other might actually coincide on a different level, and superior dimensions suddenly become accessible. The various fourth dimensional entities from the Lodges have been able, more than ever, to visit our reality, and the walls between realms are getting thinner.

For instance, when the Fireman hears the alarm signal from the big thimble in his Jupiter-like living room, his first reaction is not to check the fictional world in which Twin Peaks takes place, but rather our reality via the interface of our television screens. Through the looking glass of these devices (Fire Walk With Me actually opens with the “snow” of a television screen), he breaks the fourth wall and examines our reality to make sure that the dimensional tear signaled by the electromagnetic thimble device is not its point of origin. The traditional hierarchy between the dimensions of the real and of the fictional suddenly becomes obsolete – are we living in the real world or is the real world that of people we took for characters? When Gordon Cole has a dream about having coffee with Monica Bellucci in Paris, is he actually dreaming our reality? It would indeed make more sense for David Lynch to meet such an actress than for FBI agent Gordon Cole.

Who is the actor and who is the character in this indefinite space?

Here, there and everywhere – the point of departure is also the point of arrival in such a “Return”. When one moves in a non-euclidean sort of space-time, it becomes possible to travel without moving. “You are far away”, says the Fireman to Dale Cooper seated in front of him. But the words are enough to make him disappear, to teleport him to another realm which opens up wherever, like the Red Room and its many openings (to South Dakota, to Las Vegas, to Twin Peaks…). The dissolution of spaces into each other, the way they fold into one another, includes the mental space of the characters, whose dreams and thoughts take them places, on psychedelic “trips”, different in style to the work of the Surrealists in the 1920s and 1930s (a time more reminiscent of the Fireman’s costume and of the general atmosphere in his Palace).

The interconnection of different locations is made apparent when one realizes that the Rancho Rosa poster (notice the visual “noise” on the image, the various white lines and black spots without apparent rhyme or reason) can actually be superimposed on-top of the “Welcome to Twin Peaks” image from the opening credits of the series. 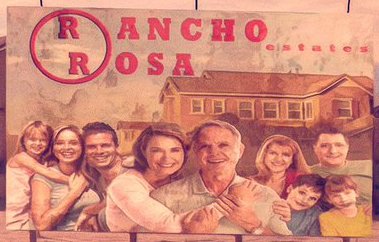 When then 3rd and 4th poles of the Rancho Rosa poster are correctly aligned with the two of the sign at the entrance of Twin Peaks, the superimposition becomes evident (see the blue shirt of the man on the top-right for instance, which matches perfectly the curve of the river). Both posters, when positioned as this, exactly end at the same point on the left hand side of the images. These perfect matches between the shirt and the water, the two poles, the left of the image… but also with the positioning of the (spooky) house on-top of the mountain lead one to the conclusion that Rancho Rosa and Twin Peaks are truly one, or at the very least, one leads to the other.

Rancho Rosa is the place where Dougie ends up. There is something ghostly about this place where no one lives. It is a prison of sorts, but a colorful one, as opposed to the prison in Yankton where Mr. C goes. This symbolic geometry is easily explained when one examines the way the various Coopers travel across a map of the US. The five points of importance for the different versions of the FBI agent are: Twin Peaks, Las Vegas, Yankton, Odessa and New York. This is the pattern they draw on the map: 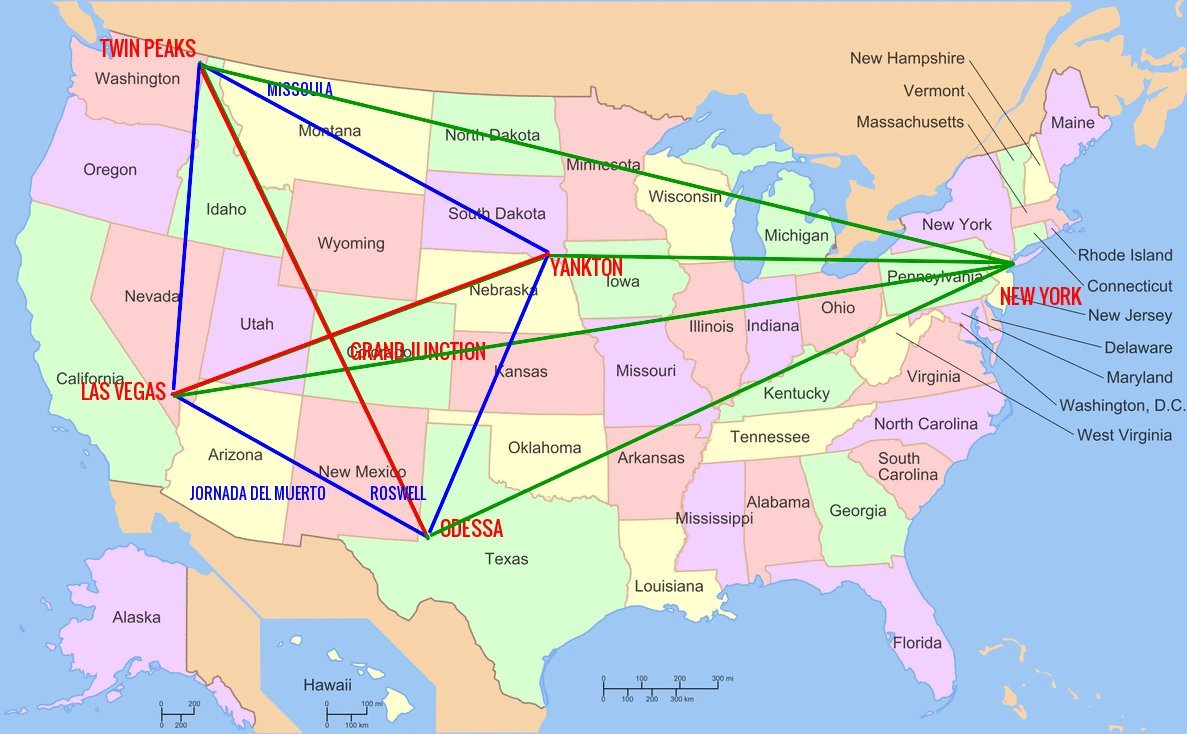 The pentagram of sorts which appears as a pyramid in the image, with New York at its top, could also be read as a vast trap (the red X in the middle of the blue trap/ezoid) with a source in the Big Apple. The glass hyper cube in the loft, with a similar X shaped target on-top of it, might very well be the center towards which everything caught within the blue lines is directed/sucked.

It is important to know that Jornada del Muerto, the place where the explosion in episode 8 takes place, is situated at precisely 430 km from Las Vegas – Dale and Diane probably drove between these two spots in episode 18, before “crossing over” to another dimension through the hole the bomb made in the desert (and through the electromagnetic web made apparent in the following image).

The straight line between Las Vegas and Jornada del Muerto continues to Odessa, where Dale/Richard finally meets Carrie Page. Interestingly, one finds the Post 430 of the American Legion in Odessa.

When one draws the lines between Twin Peaks and Odessa and between Las Vegas and Yankton, they cross at a right angle (while also crossing the Roswell area, while the blue line between Twin Peaks and Yankton goes through Missoula, Montana -i.e. the town where David Lynch was born). The point where the red lines meet is none other than Grand Junction, which of course makes perfect sense. A kind of symmetry suddenly appears between Twin Peaks and Odessa, the places where Laura and the anti-Laura (Carrie) live, as well as between Las Vegas (Dougie) and Yankton (Mr. C). This pattern can be described as something between magic, land art and geomancy, mixed with the technology at work in the New York loft (the borders between science and the supernatural also crumble in this world).

Why should the red lines meet in Grand Junction? Perhaps because according to theosophy, the Cathedral of the Violet Flame is placed in the heart of the Rocky Mountains. Perhaps Grand Junction is the place where one can find the Fireman and the other Fourth Dimensional entities. After his brief appearance in the New York hyper cube, Dale Cooper actually falls to the balcony of the Fireman’s Palace – the connection appears to be direct between the two locations. This might have something to do with the following theosophical quote: “The geomancer therefore conceives of the World as a four-sided multi-dimensional structure… At the Center is the World Tree, the Central Pillar that supports the Heavens”.

In episode 18, when Carrie Page shrieks, when she suddenly wakes up, the vibrations thus produced tear apart the thin veil of the dimensional membrane in which she lived for so long. Electricity goes off and the giant thimbles cannot mend reality anymore, which brings Laura and Dale back to square one: the Red Room.

From a shriek to a whisper…

In my book Twin Peaks: Unwrapping the Plastic, published a few months before The Return, I insisted on the importance Max Ernst’s collages in order to better understand Twin Peaks, particularly his artist’s book, A Week of Kindness.  The new season has multiplied collages of all sorts and its recurring use of superimpositions is to be linked to what Gene Youngblood had to say on the subject in his book Expanded Cinema (1970). Layer over layer of reality are to be found in Twin Peaks for those ready to excavate. Akin to the Lost Dutchman’s Gold Mine, one only needs to persevere in order to reach the auriferous vein so that the grand junction might take place.