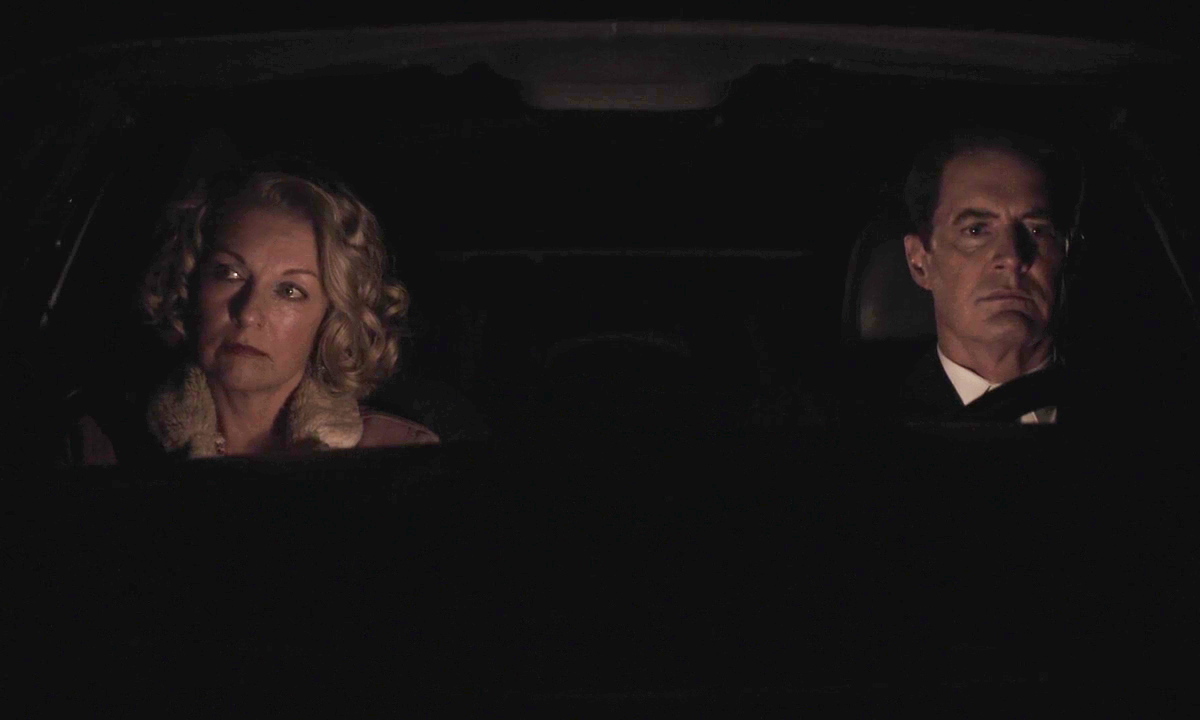 In my book Twin Peaks: Unwrapping the Plastic, I predicted that Laura Palmer would be resurrected in some form for this new season (or should I say reincarnated?). She had already come back to life as Madeleine Ferguson, and as herself in the Red Room. It made sense that she would do the same in the Return – her return, among several others (in space, in time). The reason for these reincarnations comes from her very name, Laura (laurel) Palmer (palm tree), two symbols of immortality. Now, we also know that she has been sent to Earth by the Fireman as a way to counteract the evil born out of the first nuclear test explosion in New Mexico.

In episode 18, we discover that Laura’s new avatar is named Carrie Page and that she lives in Odessa, Texas. Dale gets somehow teleported to Odessa after having accomplished his preplanned Hieros Gamos ritual (sex magick) with Diane and finds Carrie’s house thanks to information he gathers from her coworker at Judy’s. Interestingly, right before getting to the diner, he sees two containers bearing the Maersk emblem. Maersk is a Danish business conglomerate, working primarily within the transportation and energy sectors. Its emblem results from an action by its deeply religious founder who attached a blue banner with a white seven pointed star on both sides of the black chimney on a steamship when his wife recovered from illness.

The steamship in question was the SS Laura.

As always in Twin Peaks, it is worthwhile to explore the etymology of a character’s name in order to better understand who they truly are. Carrie is a pet name for Caroline, the feminine form of Charles, which stands for “full-grown”. As far as Page is concerned, it comes from the Anglo-French and means “youth, youth preparing to be a knight” – it can also be, of course, a sheet of paper.

There are several ways to understand this word combination. Carrie might be a “full-grown youth”, a contradiction. She might also be a “full-grown sheet of paper”, a blank page with no memories regarding who she truly is. She is definitely full-grown, contrary to the Laura Dale had recently lost in the Twin Peaks forest. She is also a sheet of paper, derived from the cosmic tree one finds in her hometown. The thimble that stands next to the horse on the chimney is a strong visual reminder of the electromagnetic devices linked to the Purple Palace. It’s important I belive to remember that thimbles are protective devices for the finger that pushes the needle while sewing. Sewing (from the Red Room) and sewing dreams are activities that play a central role in season 3. It’s all about ripping cloth and sewing universes together.

Here’s an extract from an interview with David Lynch on Deadline.com published on May 19: “You seem to have a very nice life balance, in terms of your art and your hobbies. Is there anything that you haven’t done yet? I would like to learn how to sew. I have a sewing machine, an industrial sewing machine, but I don’t know how to use it, and I would like to learn how to sew. There’s a lot of things like, you know, covers for things, bags to carry things. A lot of these car shows, they have these guys that do the interiors of the car, the seats and the door panels. These people are artists. All the metal workers, and the machinists, and the interior guys, it’s unreal what they do. They can work that sewing machine like nobody’s business, and cut this foam, and different layers of foam, different types of foam, and stretch this leather, and then iron this leather, steam it, and get it perfect. It’s amazing what they can do. Your films are all incredibly stylish. Have you ever thought of going into fashion? I’ve never thought about fashion, but there’s where sewing comes in as well, and getting things shaped just exactly right. They’re artists as well. Total artists.”

Was Carrie Page supposed to sew the universes back together, to repair the tear in the fabric of spacetime? If so, what went (terribly) wrong? Did Dale and Diane’s ritual not only bring him to Laura’s avatar, but also release Babalon in the world? One thing is clear: by the end of the episode, the tear wins, to the point that electricity dies (it can’t even be heard over the Lynch/Frost productions credits). The fire and the warmth are gone from the world and “Jao Déi” (the scream) takes over. 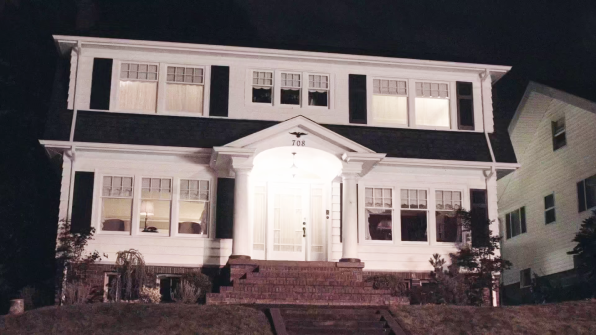 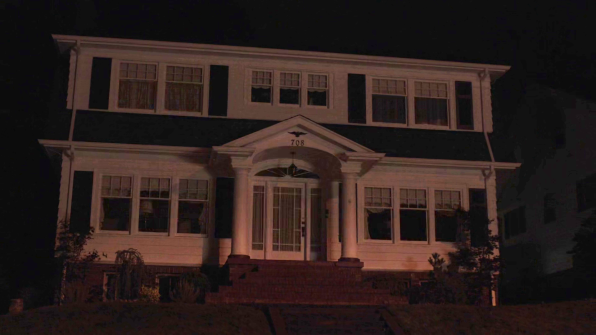 I don’t know if I’m right, but I cannot help but make a connection between the visual riddle of the dead body and other objects left behind in Carrie’s house  (we’ll never learn verbally anything about the murder that took place in her living room) and the clues left behind in the garden of the man accused of having murdered his wife in episode 3 that are examined by Gordon Cole and his team. Carrie could not have left clues in her arid and chaotic yard, so she had to leave them in the same area where the murder took place, the living room.

Could there possibly be a link between the two cases? At the very least, we are asked in both to guess what truly happened based on a simple series of visual (and probably symbolic) elements.

Another interesting moment concerns Dale and Carrie’s long drive home from Texas to Washington State. At one point, Dale and Carrie feel they are being followed by another car whose headlights are visible in the windshield. This drive and the presence of a possible follower on their trail is reminiscent of Lolita, one of David Lynch’s favourite films, another story of false identities and child abuse. Of course, Carrie is not a Lolita anymore and the car in the background finally passes them. The sequence seems to say there is no return possible. 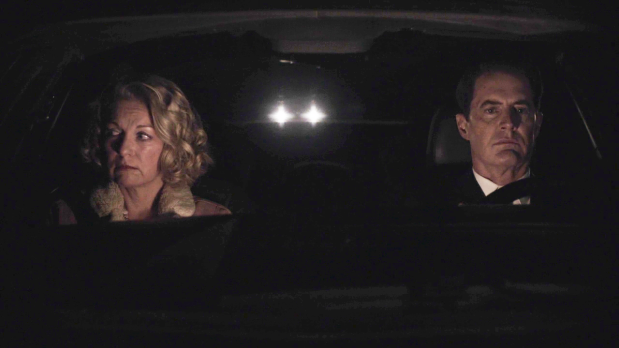 In relationship to Carrie and her Texas home, one wonders if all the paintings and motifs of cowboys and deserts, spread throughout season 3 were supposed to be signs of where Laura’s new avatar was truly located?

Dale and Carrie finally reach Twin Peaks, which they enter at night after having crossed a bridge. One has to cross a river to get there, as if entering Hell itself. And it is indeed a form of Hell that awaits them when they find out that Laura’s house is now inhabited by Alice Tremond, who bought it from the Chalfonts. Besides the reference to Lewis Carroll, this revelation suddenly questions the very existence of Laura Palmer since Alice and her husband don’t seem to have any memory of Sarah.

What is one to make of the possible links between Sarah / Mother / the Scarlet Woman / Babalon? If Sarah is Babalon (or possessed by her), could Laura possibly be the Moonchild? And also, if Naido was truly Diane in disguise, is it possible that the other woman Dale met at the beginning of episode 3 – the one who looks like Ronnette Pulaski and who warns Dale to hurry because of her mother’s return – could be a mask for… Laura herself? (Ronnette used to be her double, after all, back in the days).

Episode 18 leaves us with many unanswered questions. It is up to us now to put the pieces of the puzzle back together.