Episode 6 moves the story forward without bringing any shattering developements to the narrative, aside from a few clues (such as the papers found by Hawk), which will likely prove important in the coming weeks. The good Dale (as Dougie) continues his slow quest to find out who he truly is/was, while we learn more about some of the new characters in Twin Peaks – especially about the lone wolf Richard Horne and his shady connections. Although Richard etymologically means “brave, hardy”, his flight after the hit and run with the little boy was anything but that. Nevertheless, in spite of its slow nature, this episode brings forward several visual clues that should prove helpful for further understanding of the show’s symbolic aspects. Here are the main visual motifs analyzed below.

During the accident scene mentioned above, when the little boy gets run over by Richard’s pickup truck, a crowd gathers around the victim, sharing the pain (and sorrow) felt by the mother. At that moment, it appears worthwhile to note a piece of clothing worn by one of the women standing at the crossroads. Lost in the crowd, she might pass unnoticed, but I think that her top is quite important. It  is composed of several patterns: from top left to bottom right: a spiral, a green Kokopelli (fertility god of Native American mythology who plays a flute and may be surrounded by agricultural goods on the bottom right and is known for his appearance on ancient petroglyphs), a chevron motif, and a winding pattern that ends in a mass of matter. 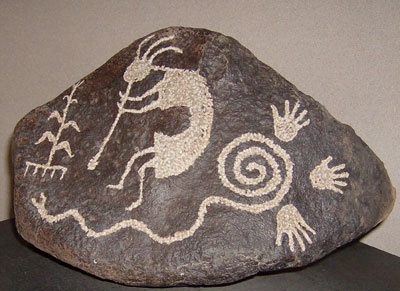 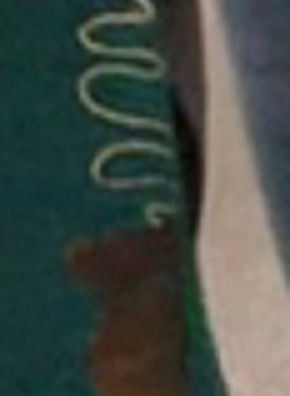 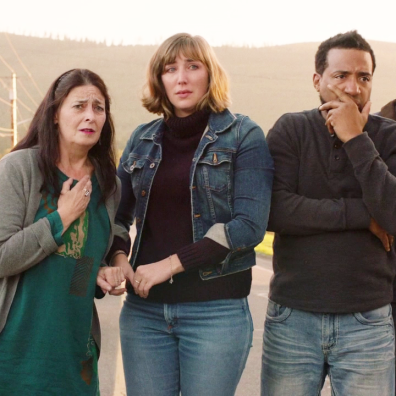 I have already discussed the importance of spirals in the works of David Lynch in general, and in Twin Peaks in particular, both in my book (Twin Peaks: Unwrapping the Plastic) and on this blog (here, for example). This cyclical motif that draws the viewer in can be found in Lynch’s interest for Marcel Duchamp’s Rotoreliefs, and it frequently recurs in his creations (think of the spirals on the Owl Cave petroglyph, or of the 6 associated with Mr. C).

The idea of harvest (for Garmonbozia) is a recurring one in Twin Peaks. In a way, it can be argued that the young boy got harvested by Richard’s car/reaper in this episode.

This episode’s most central sequence features Sonny Jim Jones. When the good Dale goes to tuck him in for the night, the scene reveals much concerning the place where the good Dale currently finds himself. The room’s decor is a mix of retro astronaut (drawings, toys, bedspread) and Wild West images (cowboys and Indians everywhere). The room is partly linked to the mythological past of the US, with all the 1950s imagery of cowboy life (the boy’s pyjamas, with their 4 wheel car design, is suggestive of the American West’s desert nature). But one could also claim that the room is linked to a past vision of  the country’s future via a vision of the new frontier symbolized by space conquest from the same decade, which has hardly anything to do with current space stations and shuttles. It’s closer to the science fiction one sees in the Twilight Zone, made of space rockets and lunar modules. Dale/Dougie himself can be described as an alien of sorts, lost on planet Earth, entirely unaware of human conventions and of what is expected from him (a bit like John Carpenter’s Starman, perhaps). 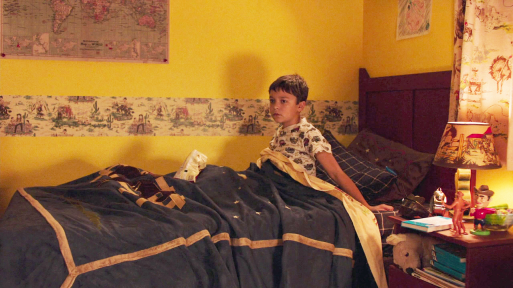 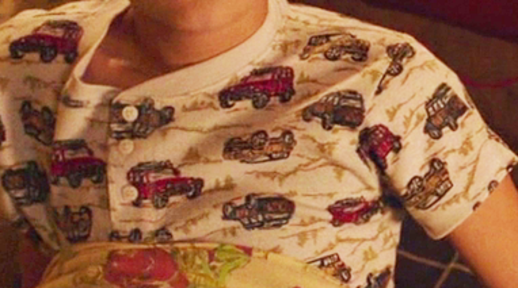 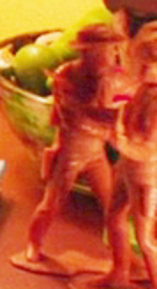 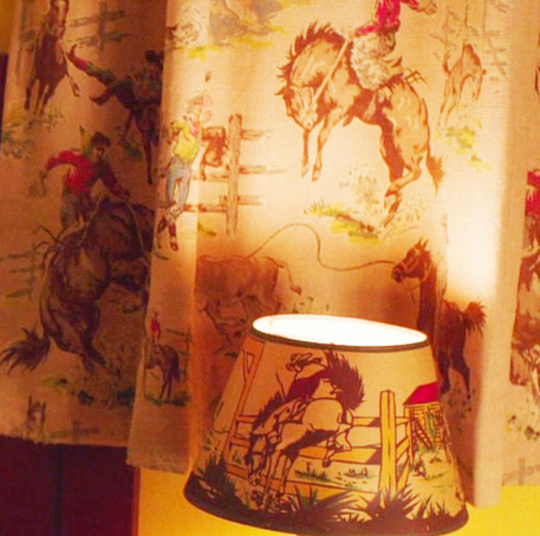 The patchwork design on his bed cover, situated between a cluster of stars and a green surface at the bottom, that may symbolize a planet or mountains, looks like a construction of some sort – a space station? – with a violet and blue figure in the middle, twisting its shape between the rigid blocks of white design. Hard to say what it represents precisely, but it’s probably not meaningless. Is it some sort of alien life form? Is this the “mother” of the lady with sewn eyelids in the electromagnetic space beacon seen in episode 3?

Then there is the top half of the bed cover with its various depicted stars. I’m not entirely sure, but the design of this constellation resembles the one of the Pleiades, also referneced in Mark Frost’s The Secret History of Twin Peaks (first on the picture of Lewis’ Freemason apron & again mentioned in relationship with Lemurians). Here’s what one reads in The Secret History of Twin Peaks when Frost discusses Richard Sharpe Shaver’s Lemurian stories: “The stories also claimed that the Lemurians had forever been opposed by a second race of peaceful aliens –called ‘teros’– with whom they were locked in eternal battle. Hailing from somewhere in the distant constellation of the Pleiades, these ‘teros’ individuals were allegedly human-like enough in appearance to live unnoticed among the human race. He wrote that they would occasionally reveal themselves and confide in humans in order to enlist help in the battle“.

Finally, even more interesting than all of this, is the drawing seen on the wall behind the top of Sonny Jim’s bed: a pink ring/planet on which stands a lone human figure, next to a smaller blue ring/planet. The resolution of the image doesn’t allow me to examine the drawing in greater detail, but it looks like there is a tree / cactus / greenish shape next to the human figure, on both rings/planets.

I believe this drawing is a metaphoric representation of Rancho Rosa – which can be read as “pink ring”. This circle is either the geographic and desert expanse where Dale/Dougie is currently trapped and/or an alien planet on which he has been exiled. It could very well be both at the same time, since things don’t necessarily have to be either/or. It could also be Sonny Jim’s creative interpretation of what he sees around him, transposed into a mythological “space western”. But since Dale replaced Dougie coming directly from an electromagnetic beacon in outer space, the Rancho Rosa planet option appears logical of course. This would explain many things concerning the relatively accepting response of his unusual behavior,  one that ‘teros’ would not necessarily find odd.

One could even argue that the desert and mineral-rich Rancho Rosa is an inverted version of the Venusian Red Room built on water – it is as far away from the Ocean of Consciousness as can be. I mention this about the Red Room because I recently found the following quote while perusing Wikipedia: “The Theosophical guru Benjamin Creme… subscribes to the view that Nordic aliens from Venus pilot flying saucers from a civilization on Venus hundreds of millions of years in advance of ours that exists on the etheric plane of Venus. These flying saucers are capable of stepping down the level of vibration of themselves and their craft to the slower level of vibration of the atoms of the physical plane… According to Creme, the Venusians have mother ships up to four miles long. It is also believed by the Theosophists in general as well as Creme in particular that the governing deity of Earth, Sanat Kumara (who is believed to live in a city called Shamballa located above the Gobi desert on the etheric plane of Earth), is a Nordic alien who originally came from Venus 18,500,000 years ago. The followers of Benjamin Creme believe there is regular flying saucer traffic between Venus and Shamballah and that crop circles are mostly caused by flying saucers… It is maintained in most of these versions of Theosophy that Venus, the ‘Planet of Love’, is the most spiritually advanced planet of our solar system. The beings living on the etheric plane of Venus are said to be hundreds of millions of years ahead of us in their spiritual evolution. It is said that the governing council of Venus – the Seven Holy Kumars – sent one of themselves, Sanat Kumara, here to guide us“.

Returning to the subject of Sonny Jim’s drawing, the green shape next to the man on the planet could somehow be linked to the painting on Lorraine’s office wall, the one to which the arrows from the piece of cardboard hanging behind her desk point towards, taken from a box similar to the ones seen in the warehouse with the glass cube. This piece of cardboard, hung behind her desk with electrical tape, goes by quickly during the scene (the camera pans) and it’s easy to miss it. But when one zooms in on this portion of the image, it becomes clear that there’s a tube emerging from the wall through the cardboard – which is reminiscent of the glass box in New York City as well. Additionally, below the cardboard on the wall, one can see black that look like a burned scorch marks. Is this connected to Agent Jeffries’ disappearance in Buenos Aires? (that would not be surprising since Lorraine was in contact with the mysterious alchemical box in Argentina).

In my book, I discuss the various elements of Twin Peaks related to the world of circus. The sixth episode of the new season revisits this theme through several references, which are made to characters typical of the circus cast (the magician, the clown). Below the surface of reality, these are relationships that return frequently in the series.

Finally, here are a few images linked to the concept of duality / symmetry: 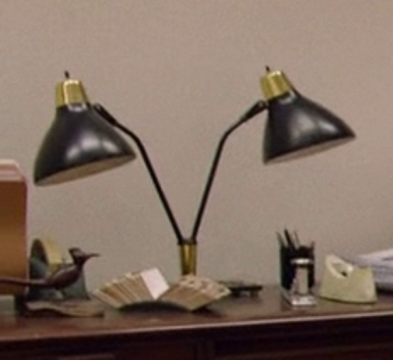 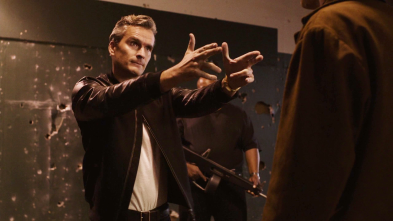 Two more days to go before we continue Dale/Dougie’s quest!