The world of Twin Peaks in the Pacific Northwest is generally a cold and damp place. But it is a cold place with a lot of fire – lots of fires, to be precise. Far from being easily contained, this primordial element spreads from place to place and knows several forms in the universe created by David Lynch and Mark Frost. From the sparks that fly off the Packard Sawmill during the opening credits to the flames that consume Laura on the inside; from the forest fire that took the life of the Log Lady’s husband to the fury that burns in the eyes of Leland…

Because of its many faces, because of its ability to mutate and devour everything it touches, it is not far-fetched to affirm that Twin Peaks really walks with fire. 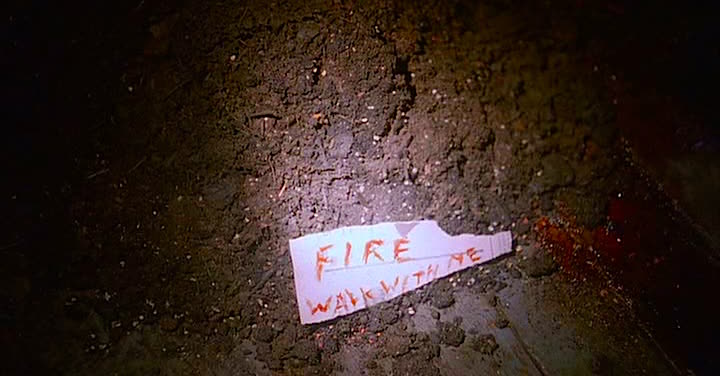 Here is what one finds on the subject of fire in the Theosophist literature (all the quotes come from various articles written by Helen Valborg for HERMES magazine in the 1970s and 1980s): Fire eats everything. His three ‘sons’ are Pavaka (Purifier), representing electric or vaidyuta fire, Pavamana (Purifying), or the fire of friction, and Suchi (Purity), the solar fire… His three forms – the sun, lightning and fire – become ‘the structural presences of the cosmos and of the inner life of men‘.

It might be difficult today to remember that electricity (the electric fire), when it was first domesticated by humans in the 19th Century, was seen by some as an occult force. Thanks to its power, it suddenly became possible for humans, though distant by thousands of miles, to speak to each other via a telephone as if they were in the same room. This power (among others) turned the dream of ubiquity into a reality (as in Lost Highway, when the Mystery Man asks Fred Madison to call him at his own house – when he’s actually standing in front of him, at a party, far away from it). 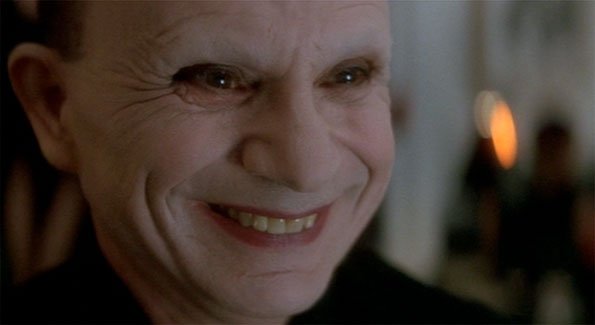 “I’m at your house, right now”

Electricity’s fire is directly connected to that of lightening, a terrifying and instantaneous bridge between two worlds: “the extraordinary mediating role of lightening in its awesome descent from heaven to earth, where it becomes fire as we know it“. The entities from the Lodges definitely walk with fire because of their intimate relationship with electricity (‘we have descended from pure air‘), which in turn connects them to the world of the occult. This is also why their relationship to time is far different from ours, because of the near elimination of the time factor implied by electricity: “it is only through the interruptions of the current (produced by dots and dashes or by voice modulations) that the element of time is made apparent“.

It is important to note the movement implied by lightening/electricity/fire. It is a force that sets things in motion: fire walk with me. “The One Supreme, in three aspects, pervades the universe and vivifies it, yet remains unmanifest… When differentiated, it becomes Fohat which, together with its seven offshoots, is the cause and effect of Cosmic Electricity… the animating principle electrifying every atom into life… the cosmic energy which produces the differentiation of the primordial cosmic matter… All that exists in the universe contains and is electricity… Fohat divides into two parts (male and female) to create the manifested universe… This forms the basis for the world, motion being inseparable from heat, leading to archetypal expansion, the dissociation of relatively homogeneous and ethereal molecules, and their recombinations, producing slightly altered ‘knots’ of energy which whirl and cool according to the fluctuations of Agni’s breath… air is fluidic fire, water is liquid fire and earth is solid fire… “.

It is no wonder that The Man From Another Place or Leland (when possessed by BOB) dance so much – they are constantly connected to the flow of electricity, the “animating principle” mentioned above. According to Valborg: “The intuitive investigator J.W. Keely called electricity ‘a certain form of atomic vibration‘”. The chevron pattern of the floor of the Lodges is a clear representation of this electrical vibration, of this liquid fire.

In other words, fire is what sets the universe in motion, a motion that generates heat: “All life is in fiery motion producing heat… Electricity and magnetism are, in essence, the differentiated aspects of Universal Motion, and light and heat are but shadows of matter in motion on grosser planes”“. Similar to the saws that cut the Cosmic Tree in the Packard Sawmill, fire divides the original unity of the universe into a plurality. Fire is what gives form to the world. But Valborg adds: “all the wonderful technology men have developed by means of Agni’s heat and electricity are merely shadows of the incalculable enlightenment and development that characterizes the awakened human mind“.

The divinity associated with fire by the Theosophists is the Hindu god Agni, the Vedic fire god. Agni is the Devourer, and he is generally considered to be the mouth of the gods and goddesses. He is the medium that conveys offerings to them. Fire and food, cherry pies and coffee, pain, sorrow and Garmonbozia…

Directly connected to the world of Twin Peaks is the following quote: “Agni may take the form of a bird who then flies down from the realm of the gods to earth. This theme is widespread in the world and often figures in myths about the divine gift of fire to human beings“. This Promethean fire bird might very well be the one that appears at the beginning of every episode of the series. Fire comes from the sky, fire is in the air… or, to quote the title of an album David Lynch recorded in 2007, The Air Is on Fire…

The connection between lightening/electricity/fire and trees/wood is self-evident. The forest fire in which the newly wed Log Lady lost her husband has already been mentioned (for reference: Ronette Pulaski’s name was probably not chosen randomly since the Pulaski is a tool used in wildnerness firefighting…). But let us also remember that the domestication of fire started when humans had the idea to rub two pieces of wood together, the friction thus generated (one of the three ‘sons’ mentioned above) producing fire. “When one makes a resolve or takes a vow, Agni is enlivened and commences the work of burning out the dead wood of constricting thoughts and imprisoning behaviour“. Also remember Pierre Tremond, in the convenience store sequence, when he declares: “fell a tree” to BOB, the one who walks with fire.

This link between the domestication of fire and the domus (house/home in Latin) is direct. Home is where the hearth is situated, the place where food is cooked and where the family protects itself from the elements. This is what Valborg has to say on the subject: “In ancient societies and in households still preserving a sense of the sacred connection between heaven and the domestic hearth, Agni is kept alive… such fires bring life to a household that cannot be provided by any other thing… In India, through the ashrama stages of life, Agni is carefully fed and reigns at the centre of the human struggle for individual and collective wisdom… All fires are sacred. All burn with the unalterable truth of Agni, and all must be used, fighting fire with fire, to purify the whole nature so that one can stand on the altar of the gods“.

Once fire is domesticated, once humans have understood that they must make sacrifices to the gods through fire, they have to accept the fact that they very well might be the sacrifice in question: “Man lives, his crops grow and his hearth abounds with nourishing food, only to find that he too is food in the great cyclic return that revolves between heaven and earth. At each moment numberless forms of fire devour forms of life which are fuel. The sun itself shines by devouring its own substance… the universe is a constant sacrifice, the transformation of life into life. ‘To live is to devour life’, and on every level of the cosmos all is of the nature of fire and water, Agni and Soma, the Devourer and the Devoured“.

This great cycle of sacrifices is universal: “The entire cosmic process is essentially a sacrifice. To grow by giving is the universal law. Self fulfilment can only be achieved through self-immolation… The earth exists chiefly to serve as the place of sacrifice. It is only when this law is recognized and voluntarily followed that the kingdom of death can be traversed and immortality truly attained. The real soma-sacrifice requires the giving of the elemental self to the flames of the higher. The victim of the sacrifice is the sacrificer himself.”

This inner fire of immortality is the ultimate goal to be reached through the external fires: “With effort the meditator identifies the fires and feeds them with the fuel of his own impurities. He learns to practise controlled burning, gaining mastery over his physical and astral temperature only as a byproduct of a deeper process of mental alchemy”.

Laura and Dale are the two main characters in Twin Peaks to have moved on from the external form of sacrifice to an internal one: “The exoteric ritual guarded by external priests is but a shadowy reflection of the fiery offering that must be made within the individual“. The Jungian process of individuation they have followed in the Red Room and elsewhere helped them turn the fires that were consuming them into ones that enlightened them. They moved from exterior to interior sacrifices so as to spiritualize their emotions.

Laura went one step beyond, though: she accepted the final sacrifice in that process when she took the ring, sacrificing her own life to get there. Dale, on the contrary, stopped one step away from the goal. He was not utterly ready to feed the fire with the fuel of his own impurities because of his fear. Laura and Dale’s minds can be seen as fiery devourers, the objects of their thoughts becoming the devoured. On the other hand, Windom Earle’s refusal to sacrifice himself in the process, his desire to sacrifice someone else to get there, could only lead to the complete cremation of his soul. Unwilling to feed the fire with his own impurities, it is his very soul that got burnt instead.

In the end, Laura is the only character (so far) to have been able to fall through the ring of fire to the other side of the mirror, to the White Lodge, a place where fire does not burn anymore, where it becomes pure light: “Absolute Motion is the eternal dark, invisible fire out of which emanates light, which sets in motion and controls everything in the cosmos. This fiery motion is the alpha and omega of electricity, galvanism, magnetism, moral and physical sensation, thought and life“. In spite of all she has suffered, she managed to stay in motion, to never stop on the path of individuation. The complete integration of the unconscious elements of her personality is what enabled her to move on to the next stage.