Why is there a lamp in the shape of the planet Saturn in the Red Room next to the armchair in which Dale Cooper (in the series) and Laura Palmer (in the film) sit? What is the meaning of this lamp? Was it chosen because of its rings, as a visual reminder of the jade ring which plays such an important role in the film? Or was it selected for some other, perhaps less obvious, reason?

One way to answer this most important question is to go back to the mythological roots of Saturn. Before it became the name of a planet in our solar system (and the origin of our “Saturdays”), Saturn was a Roman deity, derived from the Greek god Cronus (not to be confused with Chronos, the personification of time). Cronus ruled the world during the Golden Age when humans enjoyed the spontaneous bounty of the earth without laboring for it, in a state of innocence – an equivalent to the Garden of Eden – and was a patron of the harvest. This element of his personality has been transferred to the agricultural deity Saturn, and more precisely to the Saturnalia festival, held every December near the time of the winter solstice.

The connection between the Red Room and food is obvious, since it is the place where Garmonbozia is consumed. Moreover, it is also very likely that this is the place where it is actually grown, as exemplified at the end of Fire Walk With Me, when BOB “transmutes” Laura’s blood into Garmonbozia (Saturn is the patron saint of alchemists) by splashing it onto the room’s floor (to be understood as the soil of this secret garden, but also as the water – the chevron motif – necessary to grow crops).

There might also be a link here to the Roman god Mithras (or even to the Vedic Mitra?) whose followers had a complex system of grades of initiation and who met in underground temples (called Mithraea), representing caves, close to springs or streams, with an ante-chamber at the entrance – the iconic depiction of the god sees him slaughtering a bull whose blood, when it touches the ground, turns into wheat…

Another crucial element in relationship to Cronus/Saturn is the fact that he devoured his children, the future Olympian gods! He was afraid of being dethroned by them, based on a prophecy revealed to him. Eating them seemed like a good solution to avoid this outcome! Francisco Goya’s famous painting Saturn Devouring His Son (1819-1823) communicates the primal horror one feels when confronted with such an act. From a symbolic point of view, this can be read as a representation of the ravages of time, devouring all things, of the past consuming the future.

Is it possible that this was a clue about the identity of Laura’s killer, that other child devourer BOB/Leland? If so, the answer to the mystery of Laura Palmer’s death appeared early on in the series during the first dream sequence when Dale’s astral body visited the Red Room (and was given the name of the murderer, which he forgot soon afterward).

Since Saturn in particular, and planets in general, play such an important role in Twin Peaks, let us have a closer look at this question starting with the Great Conjunction of Jupiter and Saturn (an apparent meeting or passing of two or more celestial bodies) that opens the doors to the Lodges (every 18-20 years). The following drawing, from Keppler’s book De Stella Nova (1606), describes a series of Great Conjunctions and the pattern they draw in the Zodiac (the part of the sky in which the sun travels during its ecliptic journey, through the 12 classical constellations of western astronomy).

The triangle that results is explained as follows on Wikipedia: “As successive great conjunction occur nearly 120° apart, their appearances form a triangular pattern. In a series every fourth conjunction returns after some 60 years in the vicinity of the first. These returns are observed to be shifted by some 7-8°, so no more than four of them occur in the same zodiacal sign. To each sign astrologers have ascribed one from the series of four elements and thus four triplicities or ‘trigons’ are formed.” Needless to say that the image of the triangle has now become a recurring feature of Twin Peaks, and even more so since Mark Frost’s The Secret History of Twin Peaks has been published.

This in turn should be associated with the following image – the four elements mentioned above (and already discussed in a former blog post in relationship to the opening credits of the series), so important to astrologers and occultists, are represented in alchemy as triangles (and alchemy definitely plays a central role in Frost’s new book):

Remember also that the first name of Frost’s Archivist, Major Garland Briggs, means: “‘triangle land’ from Old English gara and land. The surname originally belonged to a person who owned a triangle-shaped piece of land”.

All of this to say that one should not underestimate the (supposed) importance of the planets over the lives of the inhabitants of Twin Peaks. It is made very clear in the show, repeatedly, that the macrocosm influences the microcosm and that what happens “down here” on Earth resonates with what happens “out there”. It seems to make sense to spend a little time studying the possible astrological implications of this fact (regardless of whether one believes in astrology, purely for the purposes of studying Twin Peaks).

Returning to the subject of Saturn, an interesting book was written by Liz Greene in 1976 and is entitled Saturn, A New Look at an Old Devil. As you will soon see, some of the passages found in this book are striking when considered within the Twin Peaks universe.

The book supports the idea that “astrology” can “move from its medieval heritage of predicting events and the external circumstances of life to reveal an understanding of the inner processes of the soul” which in turn can “give one freedom and self-determination” (p.5). Saturn is usually understood as a bad and malefic planet (the greater malefic), but Greene claims that even in its case, there is room for positivity. “

Now things become very interesting: “The psychic process which Saturn symbolizes seems to have something to do with the realization of this inner experience of psychic completeness within the individual. Saturn is connected to the educational value of pain (…) he is the Dweller on the Threshold, the keeper of the keys  to the gate, and that is through him alone that we may achieve eventual freedom through self-understanding” (p.10-11).

The Dweller on the Threshold

“In many ways the ancient art of alchemy was dedicated to this end; for the base material of alchemy, in which lay the possibility of gold, was called Saturn, and this base material, as well as having a concrete existence, was also considered to be the alchemist himself” (p.14). When Dale and Laura sit on the armchair next to the Saturn lamp, they are visually associated with the planet and it is implied that they are the base material mentioned above and that their future will greatly depend on how much integration of their personalities they are going to achieve through this painful education. “His pain is, finally and ultimately, part of the growth and evolution of a larger life of which he is part” (p.17). “It is the free will of the individual, contingent upon the degree of his self-knowledge, that decides whether Saturn will be lead or gold or any of the intermediate states” (p.19).

It appears that Laura made it to gold while Dale failed somewhere along the way.

Digging a little deeper: Since we are talking about astrology, why not take a look at the birth dates of Laura and Dale? Laura was born on July 22, 1971 and Dale on April 19, 1954. This means that Laura’s sign is Cancer (born on the last day of the sign) and Dale’s is Aries (also born on the last day of the sign). Cancer is a water sign (hmmm, Laura and water) and Aries is a fire sign (hmmm, Dale and fire). Interestingly, Teresa Banks was also a Cancer and therefore also related to water…

What does the book mentioned above have to say about the presence of Saturn for the water sign of Cancer (Laura)?

“The fourth house, corresponding to Cancer and the Moon, is the domain of childhood, origin, family, and the roots. (…) The fourth house is generally considered to be the indicator of the father and his relationship with the individual. (…) There is also often resentment toward men in general as the father is the first man or symbol of masculinity encountered by the child” (p. 19-21) 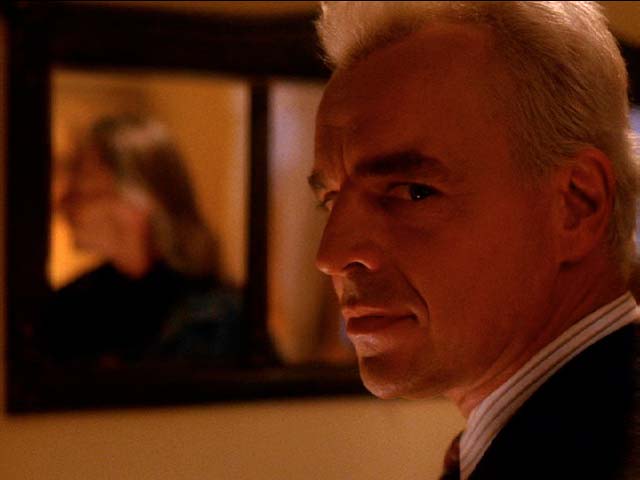 These lines could have been written to depict Laura’s relationship with her father and with men in general. The way it describes her situation is uncanny. The conclusion of the section reads: someone “with Saturn placed here who has taken the time to descend into his own emotional depths, as do the heroes of mythology into the underworld, will display that rare integration and serenity which comes from a balancing of the masculine and the feminine sides of the nature“. This is pretty much the story of Fire Walk With Me and Laura’s path summarized in only a few words.

What then of Dale Cooper? What does the presence of Saturn in his fire sign Aries mean about his personality and aims?

“Fire signs tend to possess an innate consciousness of their individuality (…) We may see the expression of this fiery self in a more personal and human way through the urge to explore and conquer as it is displayed by Aries (…) All the world is to the fiery trigon indeed a stage to be explored, acted upon, understood, and loved, and, when necessary, destroyed so that new forms may be built. (…) Saturn in the fiery signs or houses tends to suggest a barrier between the conscious personality and the intuitive perception of the self as it ordinarily is experienced by fire. This often precipitates a loss of the sense of one’s innate purpose and significance in the broader context of life” (p.71-72).

Dale definitely exhibits this urge to explore and make sense of the world, but his passage through the Lodges also brings to light the barrier that exists within himself, between his conscious personality and intuitive perception of the self. He experiences “this struggle between the desire to challenge and experience life to the fullest and the fear of being hurt, dominated, and crushed by the forces of a hostile environment” (p.78).

But there is hope: “Saturn in Aries or in the first house tends first to emphasise the fear of powerlessness because it suggests a clinging to the more superficial features of the personality and a consequent loss of contact with the richer inner person. Eventually this fear can prod the individual into a deeper exploration of what he considers to be his identity. Saturn in the house of the identity is closely connected with this search which can help to yield greater knowledge, greater integration, and the greater and more productive use of the will” (p.79). Is this what is going to happen to Dale Cooper in the third season of the series? Will he overcome his fear in order to explore his identity deeper and integrate the two sides of his personality?